After the frankly alarming success of the first installment of “philosophers who eat meat” – it was by far the most widely read piece of philosophy related writing I have ever produced, cited over 35 times! – I knew that we were due for another run. Our special guest star this lunchtime was none other than philosopher of science, amateur ornithologist, radical libertarian and all around great guy Andreas de Block (AdB). He declined to be photographed for this column so I’ve had to use this stock photo that came up when I googled him. I presume it’s a distant relative.

A fourth cousin of Andreas?

The restaurant: Leuven‘s finest Flemo-Asian restaurant, Kokoon! The classification Flemo-Asian is odd to begin within as it seemingly connotes the crossing of two different levels of culinary lineage, one denoting a small region of northern Europe with fast dimming aspirations of universal electricity coverage, the other a vast continent containing an enormous varietal of culinary styles. Its like mating a white-naped swift with Trochilidae, we’re dealing with a conceptual problem here. But somehow, in the case of Kokoon, it kind of works. Asian in this instance seems to mean a wok and some instantiation of the genus curry, manifesting itself in a “wok of the day”. Does this wok of the day on occasion contain bacon likely to have been smoked and cured in Limburg and copious amounts of cream, yes it does. Does this detract from its pretty-goodness? No, it does not. They also do a pretty mean (as in good not small, it’s a huge portion) order of ribs. Kansas City on the Dijle it’s not, but for Belgium they’re worth ordering when its the dagschotel.

But, dear friends, as you know, we were not here for the multikulti experience. We’ve come for the meat and the mayonnaise! Time now for a brief semantic interlude: I didn’t actually look at the menu as I had decided already for the witlof wok of the day, but when I heard three of the most beautiful  beautiful words in the English language spill from AdB’s mouth “steak tartare alstublieft”, I could only but mutter “twee”. For the non-English speaking readers, that means we both ordered steak tartare. Or did we? As you know, I firmly believe that a tartare should come unprepared (i.e. you mix in all the stuff yourself). If it’s preparé, it should be classified as an américain. This is a good rule of thumb in many spheres of life. Now at Kokoon they offer you a choice of preparé or not. This being Flanders there seemed no standard way of saying this so the waiter asked if we wanted it made in the kitchen or if we would do it at the table. We both opted for kitchen. As previously stated, when I’m paying close to 20 euro for some raw meat and mayonnaise, I want to see some mixing skills in action. In hindsight we should have perhaps gone for the tartare over the américain.

Americans work hard, I mean really hard, Americans work harder and longer than anyone in the world (except Italians, Mexicans, Turks, Poles, Hungarians, Czechs, Greeks – yes Greeks you heartless austerity mongers – and South Koreans). OK, let me rephrase: some Americans work really long and hard hours because the minimum wage is woefully inadequate and employers are not legally required to grant vacation or holidays. This brings me to my point. These américains, the ones on our plates, were overworked. 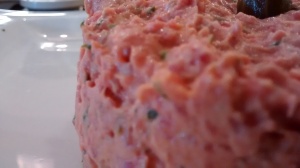 The meat was cut a bit too fine. The mayonnaise content a bit too high. Had this américain been served on a sandwich with some anchovies laid on top I would have cooed, but alas, there were no baguettes or hairy little fish in sight. There were also no capers in the mix, but a rather large one lodged on top for no apparent reason (I happily ate it). I am often quick to criticize an américan drenched in Tabasco and Worcester sauce, but this one was also lacking that little bit of kick. It’s a delicate dance.

Adding stoic to libertarian on his list of descriptors, AdB looked at me puzzled as I whined and moaned about the food like a Frenchman at Wendy’s. He offered one phrase only in rejoinder: “they gave you the choice”. And that they did, but this is a blog about américains not tartares, my hands were tied. The américain was served with a mixed salad, pleasant enough, but something of an afterthought. The frites were top-notch. Service at Kokoon is always friendly. Two américains, a beer, a glas of wine, a bottle of water and two coffees came to 52 euro. I’ll be back, for the ribs.

*Are you a philosopher? Do you eat meat? Would you like to be featured on “Philosophers who eat meat”? Simply send a CV, list of favourite restaurants,  brief cover letter and contact details of three culinary referees. American applicants should also include a statement of their eating philosophy and a summary of recent table manners evaluations.