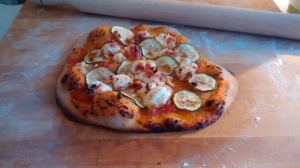 My friends, the time has come! There have been several recent complaints about the dapibus-normative nature of project-Américain. These have come from various sectors, mouse cardiologists (APP), children (LaMuncha), friends (do we have to eat there again), colleagues (will you be photographing this meal), vegetarians, the Dutch…the list goes on. After carrying out several feasibility studies, a proof-of-concept, and extensive market research (see, I was paying attention in that ‘how to commercialize your research’ seminar), I have the great pleasure to announce  the newPGR (pizza gourmand rapport). This will be the authoritative ranking of pizza serving establishments in Brussels – imitators will be crushed beneath the glutenous mass of my gently prodding wit – and a regular feature here at filetaméricain.

Let us begin with a word about the Brussels. The old timers like to say that Brussels was once a big village or a collection of villages or something like that before it became…well, whatever it is now. At the best of times Brussels actually maintains its big city/small town feel.The Bruxellois are friendly, relaxed and unpretentious, no one is really trying that hard, there still are great local bars and restaurants. But sadly there are times when Brussels forgets what makes it special, the cityscape is unfortunately blotched with these lapses of memory (rue Neuve, avenue Louise, August Reyers Boulevard slicing through Square Vergote, the city hall building at place De Brouckère). When it gets it wrong, Brussels tries to imitate its rather more effortful cousin to the south, I believe its called Parijs. Brussels is also a bit stuck between being the quirky little capital of the Belgians and the sepulchral capital of the EU. I feel this tension every time a new food trend comes to town. Pizza, burgers, sushi, noodles…first the frissons among the city’s BoBo/BCBG chatterati rise to a fever pitch about this or that place in Ixelles (the sushi/noodle invasion was a bit different as there was already an established and high-quality Japanese food scene in Ixelles long before every white guy who could use a pair of chopsticks and properly pronounce gyoza was opening a noodle bar on place Flagey) and then the next thing you know every other restaurant had suddenly become a pizza/burger/noodle joint and you suddenly find yourself eating run of the mill miso soup surrounded by Finish stagiaires. Don’t get me wrong, it’s great that you can get a Focaccia crust pizza with potato, tuna and truffle oil in 6 of the 19 communes, or a decent burger from an old tram wagon in Weiner. It’s the saturation that gets me. Whereas a proper metropolis can shrug off the latest burrito boom with a laugh, Brussels ends up looking like its trying too hard, and that my friends, that’s not Brussels. 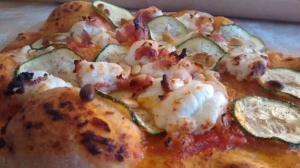 But overall the brief lived pizza panic of the late naughties has been a good thing. Whereas the standard of pizza in Brussels used to run the gamut from ‘please try harder’ to ‘pretty decent, but pass the chili oil’, there is now an abundance of young and talented pizzaioli making impossibly thin and bubbly crusts topped with fresh, ever so slightly sour cheeses and real, anchovy-laden marinara sauces. This has, I believe, in large part been made possible by the exodus of young and talented, well, just about everything from La Penisola – Italy’s loss is the newPGR‘s gain.

Our first stop is La Belle Equipe. A bit of an odd first choice as it’s not an Italian establishment, but rather the brain child of Brussels bar czar Frédéric Nicolay (lest he miss out on the upscale pizza boom). The pizzaiola seemed to be Flemish. The place has a piola al rustico feel to it with industrial fittings and a long wooden bar/table with stools (the folks at Brussel’s Kitchen take much better pictures than I do, so you should check out their write up). It looks a bit like everything else Nicolay does, but that’s not necessarily bad. 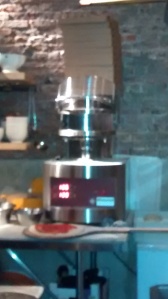 But one thing stands out – it hits you like a slap in the face from your enraged Napolitana lover – it’s a giant pizza dough flattening machine – porcodio! I have no clue what benefit such a machine has over a human dough spinner. I have caught a significant amount of flack for my own use of a rolling pin (see above), I can only shudder with dread about what kind of reaction this would engender from the pizza politie. Perhaps tellingly, there did not seem to be any Italians in the place. The machine likely saves time for the pizziola and is cheaper than hiring someone else – basically it’s another sign of the impending robot takeover. I think that the crust however paid the price. For what I suspect are the same reasons a rolling pin is frowned up this machine seemed to create a thin and crisp base that was not at all unpleasant but lacked the bubbles and airiness that I think all crust must strive for. The crispness of the crust did make it ideal for eating with your hands, which was helpful since no cutlery was provided.

My dining companion was old Brussels pizza hand and stoic Red Devil supporter, MB. We ordered two pizzas, a Bufala (12.00) and a white spinach with a supplement of smoked pork (12.50). The ingredients were top quality; the spinach went into the oven with a mountain of fresh leaves on top, which came out wilted but not wet and mushy. The Bufala, while topped with excellent cheese, suffered from some conceptual shortcomings: 1. It was topped with a mixture of salad leaves not the usual rocket; 2. the mozzarella was quite cold – as the well known Irish pizza guru NK has remarked, the bufala must be melting but not melted. As a result, the pizza tasted rather like a salad.

The spinach was more successful. The smoked pork was lovely and the spinach in the oven tactic worked very well.  This style of cooking the spinach kept the crust from getting soggy, which was good, because a soggy cracker is no one’s cup of tea. La Belle Equipe is billed as a pizza and wine place. We drank beer. The beer menu was limited. Service was friendly if rather slow – only one of their two ovens seemed to be in use, but it was a more than pleasant place to linger. Two pizzas and three beers came to €35.00. Not cheap, but reasonable – this isn’t your grandmother’s Brussels.